When I decided I wanted to be an animator, I knew there were a lot of things I'd have to learn. I had no formal art training, so I had no choice but to start at the very beginning.

I bought books that talked about timing and spacing, the twelve principles, the Nine Old Men, and how to use Maya. I overloaded my web browser's bookmarks with tutorials, interviews, demo reels, and blogs. I ordered DVDs from professional animators promising to share their techniques and secrets. With all of these educational materials before me, it was surely only a matter of time before I fully grasped all I needed to know about animation and my dream job would come a-calling.

Now that I have the first few years of an animation career under my belt, I can tell you that there is one aspect of animation that all of those books, blogs, and DVDs never prepared me for: Working with other animators.

As a social group, animators are an interesting species. Many animators grow up shy and reserved. Future animators tend to be nerds, geeks, and outcasts who are more comfortable in front of a computer screen than among a group of their peers. (I know I'm not talking about anyone reading this particular article, of course) This works out great for building the kind of patience and focus that animation requires. But it can also leave a huge deficit when it comes to developing the social skills needed for critiquing each others' work, which turns out to be just as big a part of being an animator as setting keyframes.

Critiques, like birthday gifts, can either be given or received. And like birthday gifts, the way they're packaged can contribute just as much to the enjoyment of the gift as the gift itself. It's so important to know how to offer a critique with tact and respect, yet so few of us take the time to wrap up our critiques with nice paper and a pretty bow. More often, we just dump them in the lap of our colleague with little more than a "Here. Take it or leave it."

There is also an acquired skill when it comes to accepting a critique with grace. The natural response to most critiques is to take it personally and deny that it can be valuable at all. We get defensive and stubborn. After all, no one knows as much about your animation as you do, right? How can anyone possibly hope to offer any insight without going against your original intentions for the shot?

Today we'll look at both sides of the critiquing coin, and examine some tips about how to be more gracious whether you're the giver or the receiver.

We've all been there. Browsing through the Works In Progress forum, or rating each entry during the voting round. You come across an entry that looks like the animator has hardly put any effort into it at all. 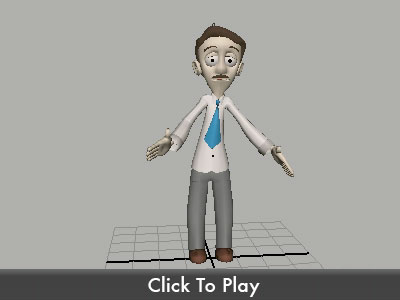 It should be obvious that leaving a comment like "Wow. You suck." or "My eyes are bleeding after watching that!" is just plain mean-spirited.

I say it should be obvious, but the administrators of the 11 Second Club find dozens of comments every month that are that cruel, if not worse. Think back to the days when you knew nothing about animation, but you were inspired by Shrek or Aladdin or Toy Story, and you decided "I"m going to give this a shot!" Imagine working for hours and hours on your entry, trying to figure out this crazy software, shaking with rage when it doesn't seem to work the way you want it to, frustrated that your animation looks stiff, robotic, and unattractive. You may be even embarrassed to show your work, but you figure that the animation community can at least give you some pointers about what you can try next time. So you press the "submit" button.

Now imagine being told that instead of ever trying again, your fellow animators--the people you've looked up to and anticipated getting to know better--tell you that they regret even spending those 11 seconds watching the crap you made them sit through.

Alright, so maybe you read that last paragraph and said "Well, duh! That's what a jerk does. I'm not a jerk, and I would never leave such a cold and callous remark. At least I try to be helpful. For example, I might look at that last animation and say 'You're constantly moving around and not holding any poses. Also, your lipsync could use a lot of work.' See? That way they know what they need to work on for next time."

Offering constructive criticism is admirable, but it's also important to keep in mind how your criticism is being presented. Any critique is bound to feel like a judgement on an animator's skills. The animator remember all of the time and effort of each tiny decision and meticulous keyframe they've set, and you're about to tell them that they should have done something differently.

Fortunately there is a way to deliver this discouraging news that will make it seem less discouraging: The Compliment Sandwich.

Building a Compliment Sandwich is easy. Simply take your constructive criticism and surround it with two easily-digestable slices of appreciation, and serve. Remember what Mary Poppins said about a spoonful of sugar helping the medicine go down? Same principle.

There is always something good to find in anyone's animation, no matter what their skill level. Find that good thing and mention it first. Maybe it's a gesture they chose, or a particular facial expression. It might not even be related to the animation itself; perhaps you like the way their lighting sets the mood, or you think the gag they're trying to convey is very funny. If you can't find anything outright that you like about the piece, simply stating that you appreciate the animator's effort and courage at putting their work in front of dozens or hundreds of their peers can be a fine compliment to lead into a critique.

Your constructive criticism should follow next: that's the meat of the Compliment Sandwich. Make sure you're still respecting the animator's effort when you're offering your comments. Even if they didn't successfully convey their ideas, they were trying to. Use your best judgement to see what they were going for, and then base your critique on that. Acknowledge their work, and then suggest an improvement.

Finish up with one last dab of sweetness so the animator doesn't walk away with a bad taste in their mouth. Even if it's a quick reminder of something you already mentioned you enjoyed about their piece, it is enough to end on a positive note. Your message is delivered, and you've shown tact and respect to a fellow artist.

The Compliment Sandwich can be as large or as skinny as you please. Seven constructive comments will still be a lot easier to take with a veneer of ego-stroking on either side. Likewise, you don't have to spend forever constructing two gigantic paragraphs of praise just to escort a morsel of bad news. Your sandwich can be almost as quick to compose as the original critique; it just looks better when you present it.

One final thing about the Compliment Sandwich: This is great practice for learning to appreciate the hard work that goes into any endeavor, artistic or otherwise. People respond to positive attitudes, and if you actively make the decision to search for nice things to say it can't help but make you a brighter and more positive person. Being brighter and more positive will help you see the positive side of other animators' work when you're critiquing, which will create a feedback loop of positivity in yourself and in the community. Believe me, it feels great to know that not only are you helping someone learn but you're also putting a smile on their face by outwardly recognizing the hard work they've already put into their animation.

Here's a multiple choice question. The reason to ask for a critique is: