Let me tell you how I used to animate:

This would all take an hour or two and would look pretty sloppy. But that was okay. As I understood things, animation usually looks sloppy when you come out of blocking anyway. It all gets cleaned up during the polishing phase, after all, right?

But polishing from this point was awful and painful and frustrating. I figured that it was simply because I was new at this animation stuff, and I'd get better and faster at it the more I animated. Months and months later, however, I was no better and no faster at polishing the sloppy animation I still had after I was done blocking. Every time I'd set my poses and breakdowns, spline them, and then go to work in the graph editor, it was same painful mess.

The problem, you see, was that I was operating under the false impression that professional animators work really quickly and thus I needed to work that quickly as well.

I think that a lot of students also operate under this impression: that the pros get the poses in their animation really fast, and then spend the rest of the time polishing. Then, following the "what's good for the goose is good for the gander" line of thinking, we students and beginners believe we should work that way, too.

Here's the thing, though: This isn't how the pros work. I was fortunate enough to be at a school where I could hear the pros talk about their workflow over and over and over until it finally sunk into my head that I wasn't being very smart. I was being dumb.

How Long Should It Take?

A perfect example of this is when I had Ethan Hurd as a mentor. During one of our weekly Q&A sessions, someone asked how long he would spend posing out a character. He said that it depended on what the shot called for, and what the schedule was like, but usually he would spend an hour or two on each pose. On each pose! And if that weren't mind-blowing enough, he then told us there were times when he might spend an entire day on one pose! (granted, these types of poses were usually ones that had a lot riding on them, and were often the ones that would sell an entire scene, but still--a whole day on one pose!)

Hearing this was like having a switch flipped in my head: I had only been spending 20 minutes at most on each pose, and usually significantly less. And if this kick-ass animator would take four times as long to pose a character, then why in the world did I think I could do it any faster?

I needed to get rid of my notions of how long I thought I should be spending on a pose, and (here's the key bit) give myself permission to take as much time as I needed to make a pose exactly what I wanted it to be; from the hips, to the eyes, to the tips of each little finger; to check the line of action, and the force of anything the character was interacting with; to use all of those principles I'd learned about animation and put it all into that one frame. Once I gave myself that permission, I noticed my animation improving a ton.

You're Not Done Blocking Yet, Son

Of course, my animation still didn't look that great, it just looked better than it had before. The thing is, I was still spending a lot of time "polishing" after setting my few poses and setting my tangents to spline. It was still a mighty painful process.

Then came Victor Navone and Brandon Beckstead. Victor was a guest at an online animation club I used to host, and Brandon was a classmate of mine during my last six months of school. Their workflows are very similar: they stay in stepped mode until their scene has a key on almost every other frame, and on every single control on the character. I'd heard about working this way, but until I actually saw their blocking stages, I never really understood how powerful it could be.

Here's an example of Brandon's blocking: 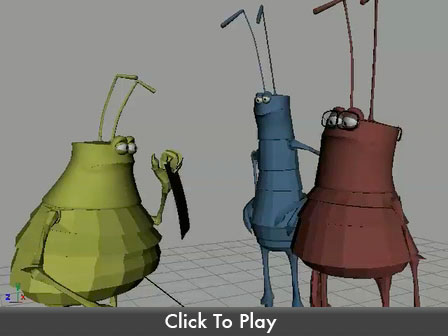 This blew my mind. Look at it: it's all in stepped mode, and you could almost call the entire shot animated! There's keys throughout the scene, not just at the "important" frames. Rather, it highlights how each frame is important for selling every tiny detail of your scene. Suddenly, I didn't want to animate like I had been, with just a few keys here and there before leaving stepped mode. Suddenly, I had (here it comes again) given myself permission to break down my scene into such tiny parts that I could see my animation there on the screen before I even considered starting to polish.

I think that it's a hurdle that a lot of students have to overcome: starting to take their work seriously. It's not easy, especially when you're still grasping at ideas about workflow, and the principles, and having strong ideas, and being clear, et cetera, et cetera, et cetera. We see our future selves as being proficient and hope that it's only a matter of time before we get there. We've heard that old chestnut about getting the 10,000 bad drawings out of our system so many times that we forget we actually need to focus on getting better while we're doing those 10,000 drawings.

If you find that you're struggling with learning animation (or learning anything, really), stop and take a look at how your approach. Are you heading sort of blindly, or blurily, towards your end goal? Do you know that there's a better way, but you avoid it because you figure you're just not ready for it yet? Well, I say to listen to that little inner-voice you've got: give yourself permission to do things the right way.* You're ready for it, I promise you.

I'm not saying that this will make animating easy, but there's really no reason to make it harder than it already is. :)

* There are so many different ways of working, and approaches to workflow, that there really is no one "right way to animate." Maybe the ideas in this article don't appeal to you, and if they don't, that's absolutely fine. Find your own way to work that's comfortable for you. The point is not to be timid about it--take the time to really make your animation the best it can be. It's been my experience that the more time you spend up front, even if it's 5 times as long as you think you should be spending, it will make the final part of your process that much smoother.