I know what you're thinking. You're thinking "Hey, how come there haven't been any interviews with 11 Second Club winners lately?"

Well, my friends, it is time for me to tell you that I am going to be taking a bit of a hiatus from my dear 11SC for a while. I had planned to take my official leave starting January 1st this year, but things got a bit jumbled over here (as things will do), and I've been focusing on other responsibilities.

There is still one interview I had planned, however, and even though this comes a bit late I wanted to be sure I brought it to you. It is with November's winner BJ Crawford, with his third 1st place entry-- that's right, a full 25% of last year's winning scenes were done by BJ!

BJ has always been very generous with sharing his sketches and rough passes, so I was excited to get to interview him again. This time around, we also veer into the territory of advice for newer animators and the kind of work ethic that BJ puts into any shot he approaches.

I hope you enjoy this, my final interview here. I am thrilled at the response the interviews have received and look forward to seeing more and more winners as 2010 marches on.

See you 'round the forums, folks! Happy animating!

If you could choose to be any animated character, who would you be?

You and I both make our living as freelance commercial animators, a career path (along with video game animation) often seen as somehow less desirable, or for the not-as-talented. Where do you think these perceptions come from?

Films just get more critical exposure and discussion than commercials. Even though there are amazing independent artists and full time artists that devote their time and talent to commercial animation, "commercial" still remains in the job title.

In this 11SC Forum thread, you talk about how important preparation is. Can you expand on this idea a little?

Planning is planning, but it may not be someone's specific planning methods that are important. It's the process of visualizing what your animation will look like before you go through the labor of creating all the required drawings. From my personal experience, I find that when I do thumbnails and jump right into the full sized animation it really hurts me, because I focus too much on details and waste time doing so. I find that I require an extra step in my process to avoid this problem. It helps me to do a "thumbnail animation" pass at half the size. I hit on the main ideas and poses, then I enlarge the drawings and create clean, workable keys. This saves so much time because I can throw away small drawings with no detail a lot easier than full sized and detailed ones.

What sort of things do you really enjoy animating?

I enjoy animating main actions and then going in and breaking up the timing of the scene with other movements.

If the character doesn't require a headshake of sorts, I try and find other secondary actions with a different rhythm.

And what is something that you are never excited to animate?

It's difficult when you are given actions to animate, and very little time in the scene to do it. This happens quite a bit in commercials when a lot of story is being condensed into a half minute. * In our past two interviews, we talked about which movies you had been watching lately. You had gone through a string of Scorcese, and then Disney and Bluth films. What are some of the most recent films you've seen?

I saw Sherlock Holmes and loved it. That made me return to the old Basil Rathbone films to watch how they were different. And then I watched The Great Mouse Detective just for fun.

(I also watched a few episodes of Glee to find the piece of dialog that was used for the November entry. I was surprised how the actor delivered the line. Great overall facial expression, but it was all in the voice.)

Let's dig into your winning entry for November. Why oh why, BJ, is Santa living in a cocoon of horror?

I redid the background so you can see his "cocoon of horror" a bit better. He's surrounded by bags and bags of letters from children asking for presents. I wanted to play off of the stress of the holidays a bit on this one. When I first heard the track I felt strongly that the only way it would work was if the character delivering the line was an iconic person of authority. A wimpy, unrecognizable guy having a breakdown didn't seem to give me enough to work with.

We've talked about your animation process before. I'd love to explore the preparation you did for this scene as well.

I did so much drawing beforehand on this one. Sketch after sketch after sketch. I couldn't seem to find the right Santa design at first. I went to Rockwell and HB Lewis for inspiration, and then the design sorta came together. But I wrestled a bit with how much of his costume he would be wearing at his desk. In the end, he didn't have his coat but I kept his hat and used it as a prop in the acting. 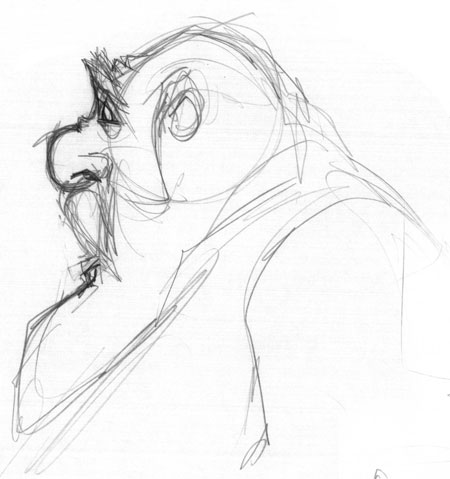 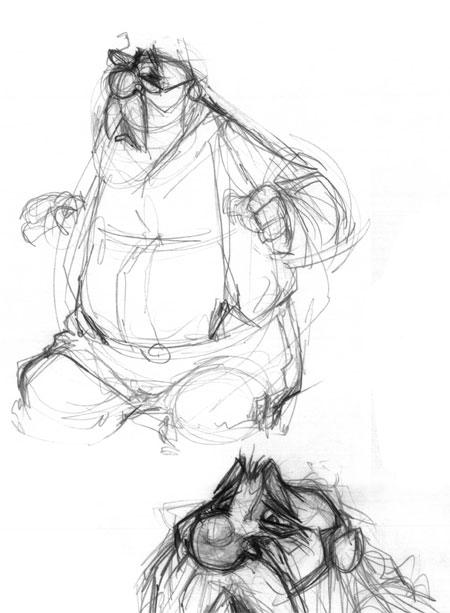 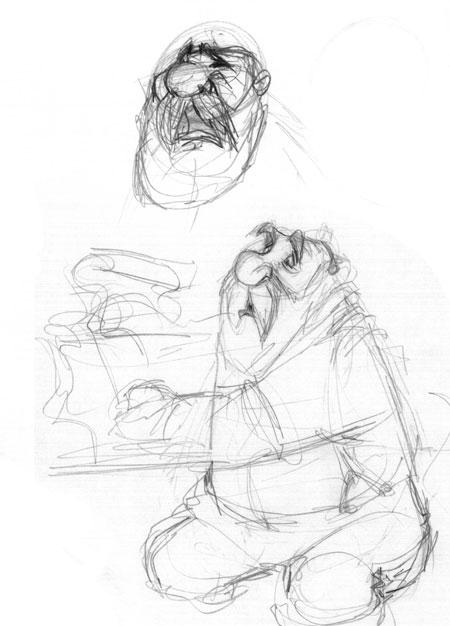 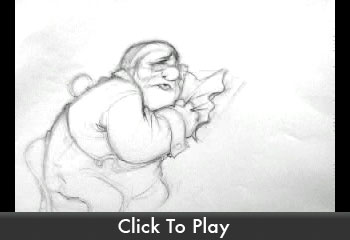 November's audio clip had a heavier concentration of subtle breathing/sobbing sounds than our usual dialogue clips. What are the particular challenges of animating to these sorts of sounds believably?

The breaths and sobs in this animation were the hardest to get right. I timed the drawings over and over again until the up and downs felt right. The "whimper" when he leans back was the most successful part in my view. I wanted in very subtle, but it still had to accent every little sound in the audio. It took awhile to get right. There was more trial and error involved than I would have liked with it. 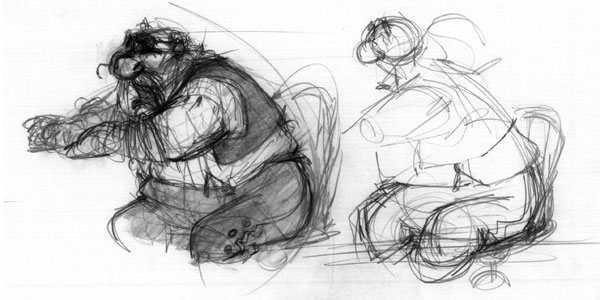 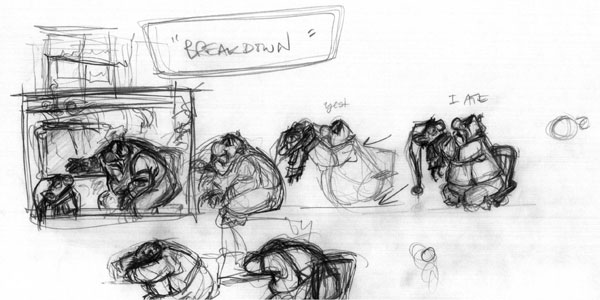 I really like when characters interact with their environment, especially the props around them; it makes them feel so much more connected to their world. The way Santa dries his eyes with his hat feels very natural, and done without calling deliberate attention to it. Talk about discovering this bit of business, and the thought-process that goes into animating something like that.

Well, I try and use props whenever I can. The end idea gave me trouble. I didn't quite know what gesture or thought to end on. I didn't want it to feel "tacked on" so what I did was have him pull his hat off during the line and gesture with it after the track ended. This seemed the most natural "ending" I could come up with. 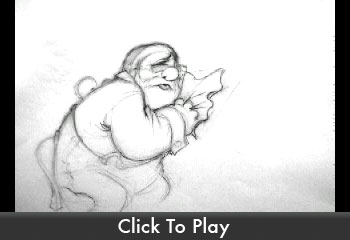 I love the Elf's little bounce on the floor! Some friends and I used to sit and study animated scenes, and occasionally we'd play an informal game called "find the bouncing ball." The premise was that the 'bouncing ball' principle is so importuned and used so often in animation, and we'd look for non-obvious places that the bouncing ball had been applied. Can you talk a bit about how the practice exercise of the bouncing ball makes it into your own work?

The bouncing ball should always a part of what animators think about when working on a scene. Maybe not so much because of the squash and stretch, but more because of the up and down rhythm of an action along with the speeding up and slowing down of the masses you are working with. It all gets so complicated so quickly, that going back to the bouncing ball never hurts. 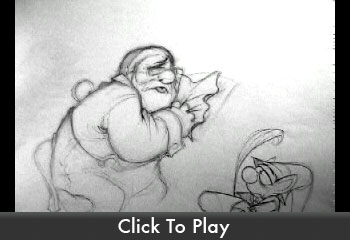 Speaking of the Elf, what gave you the idea of his take towards the camera? (to me, that feels very Muppet/Jim Henson-esque)

Yeah, I think you're right on the Jim Henson feel. It could also be a Looney Tunes thing as well. It felt right to do it because it's so ridiculous to have Santa in such a state. Some folks like to use self-awareness in their characters and others don't. I wouldn't use it all time, just on occasion, because it is fun to do. 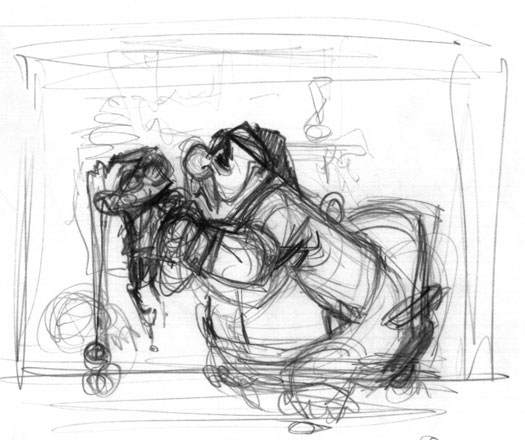 This is your third eCritique that comes through the 11 Second Club. Did you find that similar issues were addressed in all three eCritiques, or were there new issues in this eCritique that you were excited to learn about?

All three crits weren't entirely similar, but you do find out where someone's particular tastes lie in comparison with your own, and that's always helpful.

I've heard good points made about the lip sync on my entries. I will forever be working on lip sync. Sometimes you can way over-animate it and sometimes it can be really under-animated.

Do you intend to return to this piece to incorporate the suggestions made in the eCritique as you had with your August entry?

In fact, I inbetweened the Elf and played around with the timing of the drop a bit. It helped the overall scene feel fully animated. 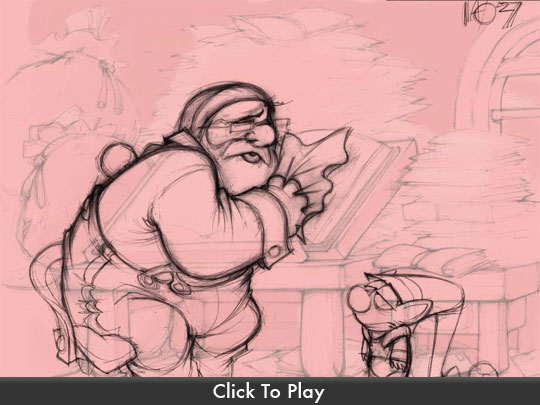 Is there anything you'd like to add about your thought-process or experience in November's competition?

I've been exposed to so many talented animators, whether it's through their blog or in person, and everyone has a different way of working. Finding what works for you and sticking with it is important, but also being open to ways of speeding up your process can be equally valuable.

This is your third time winning the 11 Second Club competition. Some would say that there is no reason for you to continue entering, and yet I have the feeling that we haven't seen the last of you here. What is is that keeps you coming back?

The deadlines. Plus, the great tracks that are put up for people to animate to. With all three contests, I'd never actually seen the scenes that they were pulled from.

There is never a really good reason not to enter, outside of making the time for it. Every piece of dialog has its own set of challenges. You never quite know who will enter that month so you're always competing with best the opponent your mind can think up. And you always know that your work will be looked at and rated fairly by your peers.

My final question usually asks for what advice you would offer other animators. This time around, I'd like to switch it up: What is some of the best animation advice you ever received, and what were the circumstances that prompted that advice?

Hands down best advice was from animator David Pruksima: He said that if I wanted to be an animator badly enough, it would happen. And it turns out I did wanted it enough. And I really love what I do.