We've heard about those two elusive concepts since the moment we cracked open the covers of "The Illusion of Life" or "The Animator's Survival Kit." They're what can make the difference between a dull piece of animation and a character that feels alive and dynamic. And I love framing through someone's animation to see how they've used timing and spacing to make something that's unique and fun to watch.

There are a lot of wonderful things to catch hold of as you frame through this month's winning animation by Ivan Oviedo. Watch for two frames next to each other that seem to have the character make a bigger move than you'd think would ever work in just one frame, and then examine the frames on either side of those to figure out why it does work. You start to get a feel for how much fun you can have playing one frame off of the next.

Many CG features that have this kind of playful feeling in their timing and spacing point to 2D animation as their inspiration. I am glad to see that this month's 11 Second Club winning entry follows in that 2D tradition and makes use of it to really enhance the appeal of the animation. Well done, Ivan!

Your blog (http://ivanoviedo.blogspot.com) shows your very distinct drawing style. What are your influences?

Well, first I'd like to say thanks for all the great compliments on my blog, I am so flattered!

There's an artist that I admire a lot called Joe Mushier. He's one of Disney's character designers and much of the work I do is inspired from his work.

Where do you get the inspiration for the characters you create? Are they people you know, or people you have seen, or completely invented from your own stories?

Almost all of them are my own creations, sometimes people I see on the streets but for sure several are Joe Moshier inspired.

Tell me about your career as a professional animator.

I have worked as an animator for something like 3 years now. Unfortunately I don't do animation 24/7 since a huge part of my time is spent with other duties, like satisfying the Brazilian advertisement market. But yes, I wish I could be animating more in order to improve my animation skills even more.

Due to financial difficulties, many talented artists become professional animators very late. I am not an exception to the rule. I've been a hotdog seller, post office employee, car washer, office boy, car driver, and so on. When I had enough of all of that, I had this serious talk with my family, which I was financially supporting, and they supported me right away: I wanted to do cartoons.

I joined an animation course in 2003 and that was my first entrance in the market as an inbetweener. I kept doing that for 2 years. Meanwhile, I got to meet a lot of highly skilled people and I tried to extract all the knowledge I could from them. I did a lot of animation tests at home before I got my first chance to be a full animator, which came to me through Sandro Cleuzo, a Brazilian animator who had just come back from Disney. I will be always thankful to him for that opportunity.

Since then, I've been jumping from studio to studio, making advertisement work, which in Brazil does not demand a lot from the animator. That can be a trap because if the artist doesn't have a strong will to become a good animator he can easily stop studying and evolving.

I am always seeking to evolve.

I do have to mention two people that helped and taught me a lot: Paulo Ignez and Evanildo Pereira dos Santos. A lot of what I know today I got from constant conversations with these two great artists!

Where do you find inspiration as an animator?

I try to look up to the great ones like James Baxter, Sergio Pablos, Eric Goldberg, Milth Kahl and so on...

Talk about the first dialogue piece you ever animated, and one or two of the most important things you've learned since then.

That's an easy one. Two animations ago I did this scene for a BLUR movie that is about to be released call NIAGARA'S FURY where I had to animate an owl flying and speaking at the same time! That was a huge test for me. It was the first time I started to learn how to emphasize the accent in a animation.

Tell me about the cat characters you used in your winning entry. Had they existed before in another project?

I drew the cats specifically for the competition. Unfortunately I didn't have as much time to polish my entry as I wanted because besides all the hours I had to focus on my current job, I was also doing freelance at home. So, every spare moment I had I devoted to the cat's animation. 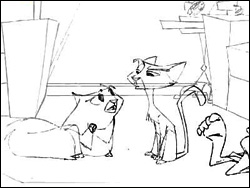 Talk about your animation process.

For the May competition, I had this idea of creating cats based on the audio file. First, I started developing both character and scene concepts. Then I got to the "dialogue sheet." I don't know how people do it in 3D but in 2D we have to work with a "dialogue sheet" in order to have full control of the lipsync timing.

Based on the audio I started drawing storytelling poses, the results of storytelling, the breakdowns and the inbetweens.

This may be a bit off of the main subject, but I absolutely love the timing of the boat on the television. Watching your characters, I can tell that timing is clearly something that is very important to the feel of your work. Can you tell me about your approach to timing out your actions, and how you get the feel that you're after in the finished piece?

When we are working on our own animation it is normal that we put the sort of timing we like the most. For me, "The Emperor's New Groove" is spectacular and that's a good example of what I use try to achieve in terms of timing.

The two older cat characters have a great rhythm between them when they're interacting. Can you talk a bit about how you used each cat's line of action throughout the scene to portray their emotion or attitude?

Well, the fat cat is the frightened one. The tall cat doesn't care about anything. He has this aristocratic pose and thinks he is better than anyone else. The little cat, well, he likes to watch TV.

How have your peers helped you with this scene?

With the little time I had, and with my beginner skills, I consider my animation far from what I'd like it to be. So yes, a friend of mine made some points about the timing between a pose and another. I tried to get the most out of his advice and the result is right there.

What was your initial reaction to the eCritique?

It was brilliant! Every single word of it! I wish I could have one of them after every single scene I made. It was a huge learning experience for me and a lot of stuff makes sense to me now.

Some of the stuff Kevin said I read already in animation books but having a professional pointing that out on my own animation was a blast! All of the suggestions from the eCritique will be in the next animation I do.

Is there anything you'd like to add about your experience in May's competition?

I just have to thank everybody for all the compliments you gave me. Also, I'd like to say a HUGE THANK YOU to Kevin Koch for all the constructive critiques. I wish I could be working with such a great professional as him so I could listen to the "Pure Gold" everyday. Thank you to everybody from 11 Second Club for the opportunity to show off a little bit of my work.

What advice would you offer to a beginner who wants to enter the competition?

Never give up! Always go after your dreams. God unlocks the doors but we have to go there and open them up. Also, watching a lot of good animation movies and reading specialized books like "The Animators Survival Kit" and "Illusion of Like" is a very good start.

Click here to discuss this interview in the forums.comments powered by Disqus