Note from Aja and Mark: We're excited to announce that we'll be interviewing each month's winner. 11 Second Club contributor Eric Scheur will be conducting the interviews which you'll be able to find here each month.

Each month brings so many entries into the 11 Second Club competition. I'm always excited to see the variety of ideas that a simple line of dialogue can inspire. There's never any shortage of new interpretations; one animator may choose to place two characters in a hot tub, another may set them guarding a medieval castle, while another animator may hear the very same audio and envision a city in flames being devoured by two gigantic monsters. 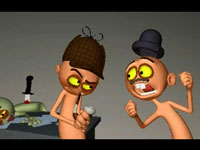 This month's winner, Phillip Hall, chose to place the dialogue in a scene with two iconic characters: Sherlock Holmes and Doctor Watson. Casting one as a stoic and pensive conspirator and the other as a more energetic figure, the piece stands out for creating a strong dynamic between these two men caught in an incriminating scenario.

I was pleased to be able to talk to Phillip about his process, and what methods went into creating his winning entry:

How long have you been animating? What is your training?

Phillip Hall: I have a Bachelor of Science degree in Media Arts and Animation from the Art Institute of Fort Lauderdale and I have a Master of Fine Arts degree from the Miami International University of Art and Design. I've been setting keyframes for about 9-10 years now but I would only consider what I've been attempting the last 6 years to be character animation. Sure I'm proud to say I've earned those degrees, but for me the things I've learned on the job have been far more valuable than anything I learned in school. You just never stop learning and growing.

Do you work as an animator professionally?

Yes, currently I am employed at the Art Institute of California, San Diego as a full time 3D character animation instructor. I've been teaching there for about 8 months now and so far I'm having a blast. They say you learn more when you teach and that has definitely been the case for me. [Teaching] puts you out there and forces you to prove you know what you are talking about.

Before that I worked as a character animator at International Game Technology in Reno, Nevada. I was hired right out of school in 2004, so really I've only had two jobs in the industry. I never set out to animate for slot machines but it was my first full time job in the industry and it was a tremendous learning experience. It was much more rewarding than I initially thought it would be. The people I worked with will never be forgotten and it was a great place to get the ball rolling.

What are your goals as an animator?

My goal has always been to work on feature animated films…but I do understand it is a process. It's a journey, and with it there are times when you struggle, and you fall, and you have failures, but you take from them and you grow. So when things like winning the 11 Second Club happen, those small little victories mean so much that it really makes it feel like everything you've had to go through to get to that has been worth while!

Where do you find inspiration as an animator?

I could write all day on this one. I heard a scientist on the Discovery Channel say, "The greatest gift the Earth could give to the Universe is LIFE." We are surrounded by it! It's everywhere!!! So as an illusionist of life, I guess life is THE inspiration, but aside from that I find inspiration in:

Seriously, I could go on and on. It never ends!

What was your first thought when you heard the audio clip? 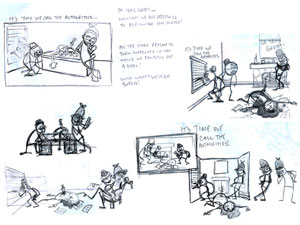 I obsessed over that little sound. I had a lot of ideas but they all seemed lame. I tossed and turned and lost sleep trying to figure out what that sound could be but it was my wife (and I give her full credit) who came up with the idea of it being a mail slot.

Once I knew what the noise was I thought about the words, "accessories to espionage and murder," and immediately thought about 2 spy guys. Then I thought about Christopher Lloyd as Professor Plum in Clue. So I took a break and watched Clue and studied his performance. That movie cracks me up, but I wanted characters people could identify with, or at least recognize and that's when I came up with putting a spin on Sherlock Holmes and Dr. Watson. They are two well known spy guys and I thought it would work. Once I had that, I was finally ready to plan my animation. Whew!

Talk about your animation process. 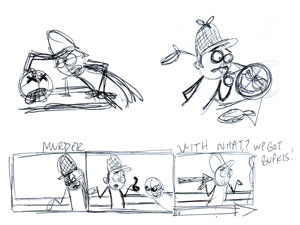 I absolutely most definitely use reference. I try to get to a place where I have listened to the audio clip 17 trillion times and know it by heart. I've written it out and memorized the inflections and I know the beats. Then I try to thumbnail out what I am imagining, to see if it looks okay on paper. This month I spent quite a bit of time on the staging and planning.

Once I think those little doodles are looking good on paper, I take a shot at acting it out [on video].

How did you define the personalities in your piece?

Once I knew I was dealing with Sherlock Holmes and Dr. Watson, I had to decide who was going to speak first. I just liked the idea of them being in the wrong place at the wrong time.

I wasn't sure who I wanted to say the line "All the more reason to turn ourselves in now while we can still cut a deal!" It sounded so mischievous and I thought it would be funnier if Sherlock Holmes, who normally keeps his composure, was the one freaking out and Dr. Watson was the one that was plotting a way to capitalize on the situation, so I gave the line to him.

I did a thumbnail drawing of Dr. Watson with this evil smile and I thought, "This is THE pose. This pose has to read."

How have your peers helped you with this scene?

Many of my students got to see the early blocking stages. I wanted to introduce them to the competition because most of them had never heard of the 11 second club. I would take a few minutes at the end of class and let them critique me for a change.

A specific piece of advice I received from one student was about overshooting Dr. Watson's arms. Earlier on he noticed they were too bent and too stiff. It was a good catch and he was right.

Give an example of a particular part of the animation you struggled with.

When Dr. Watson enters stage left, I had a hard time getting him to feel natural entering the frame. I wanted him to feel like he had weight but at the same time, I really wanted to get this cool squash and stretch thing happening and I had a cool idea about getting the secondary action happening on the hat. My big concern was only the upper half of his body would be showing and I was afraid that he would appear to be floating across the screen. The legs weren't going to be showing so I didn't animate them. It could still use some massaging, but I overcame this by posing where I thought the high points and recoils would be based on my reference video.

What was your initial reaction to the eCritique?

I was freaking out! When I saw that it had finally been posted, my palms were sweaty and my heart was racing… I was pumped! I loved it! I thought Dave Burgess was fantastic and I am so appreciative of the time he took to critique my entry. My head is still spinning. Talk about inspiration!!!

Talk about one or two parts of the eCritique that enhanced expanded on the ideas you had originally set out to animate.

Man, there was so much!

I love what Dave Burgess said about the staging of Dr. Watson in the very beginning about getting him to move before he speaks to draw the audience in so there is no question who is speaking.

Rolling the fingers out from the rest position on Sherlock's hip. Keeping the character's eyes connected at all times. Reversing the curve on the spine to get a greater contrast in the pose.

Talk about any new concepts you were introduced to through the eCritique.

The biggie for me was offsetting the timing on the arms and followthrough [on the wrist]. It just breaks up the symmetry in the body and makes it all that more appealing. The great thing about this eCritique is now that I am aware of these issues I will always be looking for them!

Do you intend to return to this piece to incorporate the suggestionsmade in the eCritique?

I would just like to thank everyone involved. This has truly been an amazing experience, one I will not soon forget.

Thank you to everyone at 11 Second Club.com and Animation Mentor, everyone who voted, and a thousand thank yous to Dave Burgess for his time, encouragement, and fantastic critique!!!