I remember reading a study somewhere suggesting that one of the most universally funny events that a person can witness is another person accidentally falling down. Whether you're American, French, Chilean, Zimbabwean, seeing someone fall down will make you chuckle. Children know it before they even learn to speak.

Browsing through this month's entries, it was wonderful to see the variety that was represented in this very basic, cross-cultural bit of physical comedy: A man falls down. I really got a sense that everyone was having so much fun with their ideas, and then bringing those ideas to life with their animation. It was a perfect opportunity to play with really exaggerated timing, extreme extreme extreme poses, and getting really fluid motion by breaking the character's joints (literally!).

Marco Palmieri's entry for the March competition came in 4th place. Using that experience as inspiration, he put his efforts into April's competition. His efforts paid off, as his animation was voted first out of 92 fall-down funny entries.

I see on your website (MarcoPalmieri.com) that you work in 2d as well as 3d.   Which one did you start working in first?

Well, actually my first ever animation was a stop motion short when I was 8 years old. My father had worked in animation in Italy in the 70’s and he taught me the basics. So one day I gathered most of my toys, my father’s Super-8 camera and I shot frame-by-frame sequences that made no particular sense. I still have the film somewhere. It’s actually not that bad! But my passion was to draw, so naturally I got into 2D animation soon after that. 3D came into the picture way down the track.

Has your 2d work influenced the way you think about 3d?

I’ve always animated on paper, so when I first got into 3D I was naturally very frustrated with it. IK, FK, joints popping, computers crashing, long renders! The list was endless. I didn’t like it for many years. 2D animation had always allowed me to pose a character however I wanted, and move it where ever I wanted and however I felt was best, and I knew the rules could be broken when I needed to break them. 3D felt like the total opposite of that. I was always thinking about the technicalities and logistics of how to do something and that took the spontaneity out of the process.

But then 3D improved, I improved, and I learned to understand it. It will never replace 2D for me, but it has earned its place as another great tool.

I love 3D now. And I appreciate that there are pros and cons for both methods. So I guess nowadays I try to include them both into my tool kit.

How did you get into the industry?

I completed a course in animation in Rome, Italy in 1995 and moved back to Australia to work on the 2D animated series Little Elvis Jones and the Truckstoppers. I worked there as a clean-up artist and assistant animator. Once that project finished I got a job as Animator at Planet X Studios in Melbourne. I worked there for 4-5 years working mainly on TV commercials. That’s where I was first introduced to 3D animation. I worked in a whole range of styles and had to learn a lot very quickly.

In 2002 the studios burned down in a fire and we were all kicked to the curb. Since then I have been working freelance for various studios and also doing illustration work.

Where do you find your inspiration?

I have always loved observing people. How they walk, talk, act and react. The little subtle things interest me the most. The head, eyes, mouth and fingers. Body language can tell you a lot about what someone is thinking, so studying that can help you to create more convincing performances in your own animations.

Knowing what we are likely to do with our body when feeling a certain emotion is key. Everyone is different and unique in how they layer their actions. Some are more pure and some are more conscious of their movements. It’s fun to read into it and break it apart.

Some of the animations that I grew up watching and have inspired me to get into animation have been Looney Toons, Popeye, Scooby Doo, Fat Albert, Mickey Mouse, The Flintstones,,Ren and Stimpy, the list goes on….

But in the past few years I have really been studying the Animated features from Pixar, Blue Sky and other major studios. I’ve watched Ratatouille about 20 times. There’s just so much to learn from it all.

Talk about your process: what does it take for you to get from the audio file to your finished piece?

Generally I try to plan as much as possible before getting into the animation. Reference footage, thumbnails, sketches, animatics, etc.

For this piece I drew some sketches and then began my animatic in Flash. I have found a good technique that works well for me. I drag the audio file into Flash and begin with roughing out timing of cuts and general layouts.

(My wife, who is a great critic, gave me some feedback at the animatic stage that really influenced the outcome. She mentioned it would be cool to see him come right up to the camera.)

Then when I am happy with that part I will begin to elaborate by adding the key poses and some facial expressions to get the right energy and emotions. Without going into great detail, I get it to a stage where I feel the most important actions are covered and the message is coming through clearly. 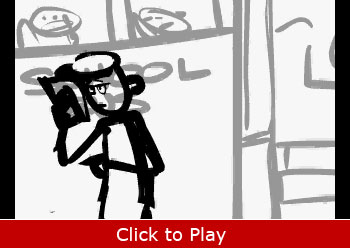 I’ll then output it as a quicktime to use as reference for my 3D. That’s when I begin blocking it out in Maya.

It’s very fast doing it this way because the spontaneous part is done quickly in a drawn form with each pose often drawn as a shape or line. And I feel I haven’t committed to anything yet because it’s easily changed. If you try to jump straight into 3D and begin posing and blocking without a plan, you’ll run into all sort of issues with rotations and unwanted transitions between poses because you’ve played with the poses too much. Believe me, I’ve done it many times! Even if you can’t draw all that well, it’s an important stage that shouldn’t be skipped.

Where did the idea of a bus driver come from?

With the April competition, I listened to the audio over and over and over. I took it everywhere with me on my iPod and really tried to listen to every sound and detail until I began picturing it in my head. What stood out to me about this audio was the reckless attitude of the main character and the fact that he seemed totally cool with endangering himself or others in order to avoid dealing with the problem at hand.

I started by writing a list of all the possible situations that would really require the use of arms and legs. I came up with about 3 different ones. The Bus Driver seemed ideal because it played not only on what was happening in the scene and the dangers of hurting himself but also on what would happen next? Will the kids make it home? Will somebody stop him?

Talk about your approach to lipsync, and making a character's mouth shapes appealing and asymmetrical.

Well, nothing organic is really ever symmetrical. If it is, it looks unnatural or robotic. I try to add an element of asymmetry to most of what I do. I guess with the Bus Driver I felt his cocky attitude would lend it self to talking out of the side of his mouth. It kind of came naturally to me when I acted out the scene in the mirror.

Did you find yourself struggling with any part of the animation?

Yes! I really had trouble with one of the wrists at one point. It seemed to not want to rotate the way I wanted between the poses. I ended up key-framing each frame of that section in order to get it to move the way I wanted.

You entered the March competition as well, and came in 4th place.  How did that experience influence your choices and approach to the April competition?

The March contest was great. It was my first entry and I must say I learned a lot from it. I learned to keep it simpler and clearer. In April I focused on the animatic more and made sure it came through really clearly before going into 3D. I also tried to make the story more unique and interesting. And no camera cuts this time.

What was your reaction to the eCritique by Dana Boadway?

I was checking the 11SC site every day, 3 or 4 times a day. I was very anxious to hear it and so when it finally was posted I felt mainly relieved at first. Then as I watched I got really excited about the fact that I was going to be able to make it even better thanks to Dana’s great input. She had some great things to say, and all that she said made so much sense to me.

I felt that Dana really made a lot of great observations. A good deal of what she said was detailed stuff that would actually add a lot to the end result. Overlapping the actions, breaking the joints sequentially, details in the fingers, etc.

Her comments also really helped me to understand how to better it by varying the intensity of some of the actions in order to set up the gag more effectively.

Dana really talked about how to enhance the existing ideas and overall how to improve some of the body mechanics.

Throughout the ecritique I was thinking to myself “Oh man, that’s right, of course, I should have known that! Why didn’t I see that?” So a lot of the things Dana mentioned I had heard of, or read about and she really pinpointed these out for me. For example, she suggested creating contrasts in the actions within the shot – such as toning down the arms at the start to set up for the big fall. I thought that was a great suggestion and one that I hadn’t thought of before. Thanks Dana!

Do you intend to return to this piece to incorporate the suggestions made in the eCritique?

Oh yes! For sure. I want to do it straight away while it’s fresh in my mind. I want to see it with all the improvements made.

Well, I have to say, thank you to Eric, Aja, Mark, and the 11 Second Club for the opportunity to be a part of such a great contest. It really is a great place for animators who are at any level to come and learn and expand their abilities and most of all have a lot of fun in the process.

Also, huge thanks to Dana for her time and great critique.

My advice to anyone entering the contest is to plan as much as you can. Try to see it as a scene from a real animation job. Break it all down and go through all the stages as if you were in a studio. Don’t leave anything to chance and don’t let the computer choose things for you. Every action has to be intentional and has to make sense.

Good luck to everyone!

Discuss this interview in the forums!comments powered by Disqus